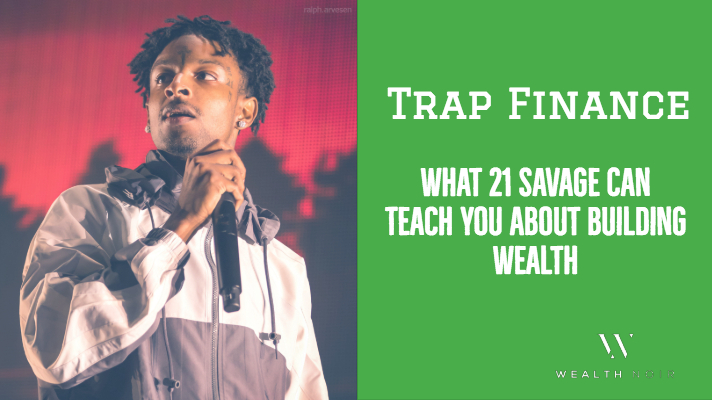 People who know me personally understand there is little to no range in the music I listen to. I’m not eclectic and can’t tell you what Katy Perry or John Legend’s last songs were, but if you want to debate the merits of 2 Chainz’ last album, discuss the progression of southern rap from T.I. to Lil Yacthy, or talk through the latest 21 Savage and Cardi B collaboration, I’m your man. I listen almost exclusively to trap music (rap … not electronic).

I find a lot of financial motivation in music from the trap and have written about it before. While many may argue that most money references are about spending cash on frivolous things-one of the worst things you can do with your money-that’s only the surface level. At the core, there are stories of struggling against odds, a focus on the transformative power of money, and a strong spirit of “gettin it”, a.k.a. a hustler’s mentality.

Every once in awhile you get a rapper willing to be more direct and detailed about letting the world know that getting money isn’t just about cars, chains, and shoes. They are using the platform to teach the importance of financial literacy and personal finances to the masses.

I think any fan of hip-hop and wealth has come across Jay-Z’s 4.44 album and the amount of pro-wealth building lyrics contained within. The album sparked the creation of a personal finance book for African-Americans because of its heavy focus on building wealth. Jay indicates that financial freedom is our only hope and preaches of the generational wealth he has created and will give to his children. And while some rappers rather hold money to their ear and shun the idea of financial freedom, Jay is not alone in his fight for financial freedom.

When it comes to financially literate rappers, it’s hard to match Dee-1. The first single I came across, “Sallie Mae Back”, is a ballad dedicated to paying back student loans. When Dee-1 signed his first record deal, instead of a Bugatti … he paid off his student loans. Fast forward a few years, and he’s doing a tour with Sallie Mae focused on promoting college planning and giving out scholarships along the way, after signing a partnership with PwC on a financial literacy campaign.

While most don’t have Dee-1’s commitment to financial literacy, there are snippets found throughout many other artist’s songs. Lil Dicky teamed up with Fetty Wap and Rich Homie Quan to talk about saving money. The music video reinforces the song’s pro-saving message by aiming to spend no money on the entire shoot. There’s even a documentary showing his hustle to get a video done on $0.

Check Out:  Bringing You Quality Black Content: An Interview with Uzo Ometu of BlackOakTV

Go a little deeper and you’ll find all kinds of nuggets of wisdom from Rick Ross, DJ Khalid, and even 2 Chainz. You’ll need to wade through a lot of Bugatti’s, Bentley’s and Gucci, but it’s there.

But the rapper who truly surprised me with his love of financial freedom was 21 Savage.

Out of all the artists regularly found on my Spotify playlist, 21 Savage is constantly in rotation. I couldn’t explain it if you asked, but it’s hard for him to drop a song I don’t like. The beats always hit, his features always stand out, and I appreciate the lifestyle he talks about.

As with most rappers, hidden in his songs are nods to building wealth and using money to do more than just buy nice things. I’ll be honest, you have to dig into the lyrics to find them. They’re hidden in between a lot of “Rari’s” and “Gucci’d Down”.

Here we see 21 Savage investing in professionals to help him manage his money. Everyone doesn’t need an accountant, but those who do are always better off for investing in one. Those focused on building wealth know when and how to build a money team. Personally, my accountant helps with a lot of tax planning and ways to structure my holdings to keep my tax burden low. He’s also been great to discuss different investing or tax strategies with since he’s seen so many clients and situations and can give me insight to things I will run into in the future.

And don’t forget that 21’s accountant has good news for him. I think it’s safe to assume she is talking about his net worth and wealth being way up, not his spending or just his income.

Now we are getting into real business strategy. For those who don’t know, many artists take an advance payment against their future royalties when they sign a record deal. Really … it’s debt. Music labels know this and will make their money back elsewhere in the deal with restrictive terms or by keeping more of the royalties. We all saw the New Edition movie, right?

Check Out:  4 Ways to Thrive During a Stock Market Downturn

Check Out: How Robo Advisors Manage your Wealth for The Low

But 21 Savage knows better. By forgoing the advance upfront, he can get a better split of the royalties on his music. And, as of 2018, 21 Savage is signed to his own record label, which has a distribution deal with Epic Records. I won’t pretend to know the music industry and their deal structures, but I know that doing business through your own company and controlling more of the deal is almost always the better move financially.

One important aspect of this song is where the M’s are going … a bank account.

The entire rest of the song is literally a step by step guide on how to waste money. $7,500 on a Saint Laurent Jacket. Spending a “light fifty” at Neiman Marcus. Tennis chains and “they real blingy”.

But, if he is able to afford all of this and keep $8M in the bank account, well that’s different. While you should not sacrifice your financial well-being to buy nice things, I would be lying if I said that nice things aren’t an important part of the motivation of my own personal wealth journey. If you have saved $8M then you have earned yourself some nice things. He might be doing a little too much in the spending category, but $8M saved is doing a lot in the saving category. I hope it’s in a diversified stock portfolio and not just a savings account, but since saving is the most important skill for building wealth it still warms my heart.

Honestly, if you gauged 21’s love of building wealth just from his lyrics, it’s a little thin. There are definitely some hidden gems but they don’t compare to the catalog of financial information for more financially focused artists, what he is doing outside the studio is where his dedication to building wealth shines.

One day while scrolling through Instagram I came across a short clip of an interview of 21 Savage. As a fan, I could spare the sixty seconds to watch. I was very surprised when I heard what he was talking about. It was an interview with NBC News and was about 21’s financial advice.

Check Out: Why I Refinanced My Student Loans

The full version was eye-opening. 21 Savage really knows about building wealth and investing. There was even an investment challenge at the end, where he continued to drop knowledge. They handed him 21 dollars and asked him to spread his investments across several investment opportunities. He crushed it. He managed to take into account risk profiles, his own strengths, and proper diversification as he spread his investments.

One thing that caught my eye was that he has launched a campaign to help 21 teens learn about personal finance.

The 21 Savage Bank Account Challenge is a contest for teenagers to win $1,000 in a bank account. In order to win this starter account, you must complete several challenges to teach the basics of personal finance. It concludes with an essay challenge.

One reason Wealth Noir exists is to help make critical financial literacy information more accessible. The information is available and out there, but sometimes it’s about connecting with others and making it personal. This is why I truly appreciate the steps 21 Savage is taking. It takes a lot to make building wealth sexy.

But I know 21 Savage has a true commitment to financial freedom and building when I hear he has said he is no longer buying jewelry. He wants to be a good financial role model for new rappers and wants to use the money for better purposes.

You have to appreciate how someone who raps about $7,500 jackets has committed to no more chains so he can set an example of correctly utilizing money as a rapper.

You Can Find Motivation Everywhere

The real reason I wanted to highlight 21 Savage and his focus on building wealth is to show you that motivation for your personal journey in wealth can be found everywhere. You may be surprised when you dig a little just how much support for building wealth and financial freedom you can find. 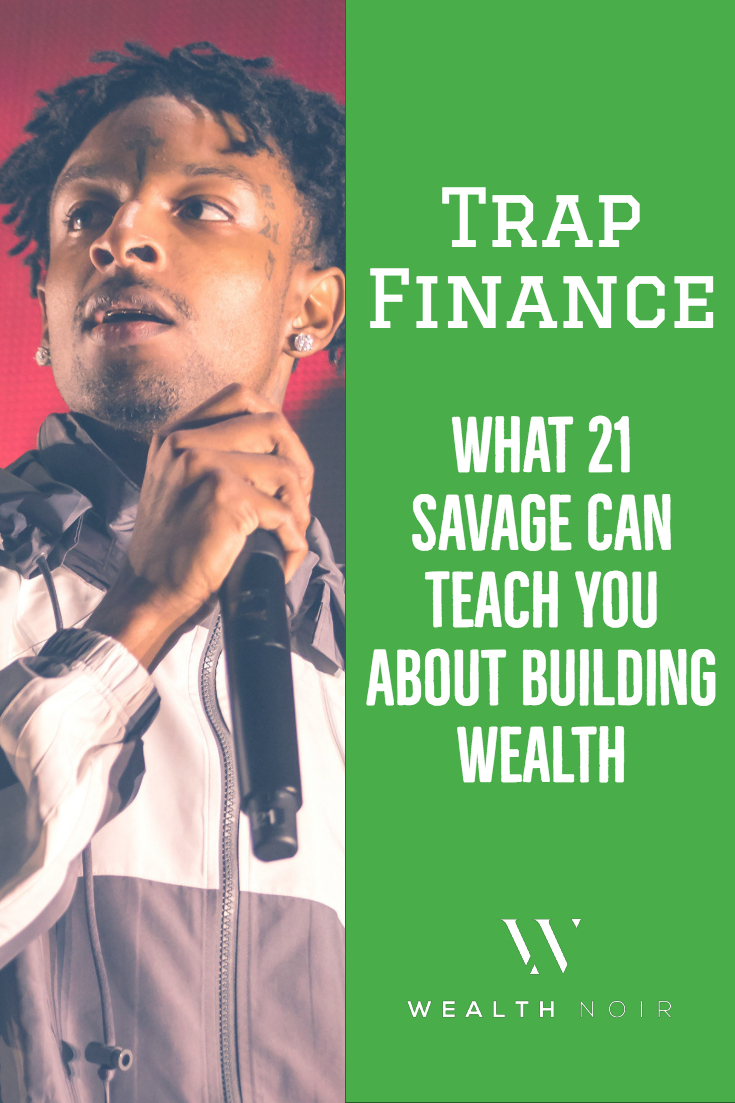