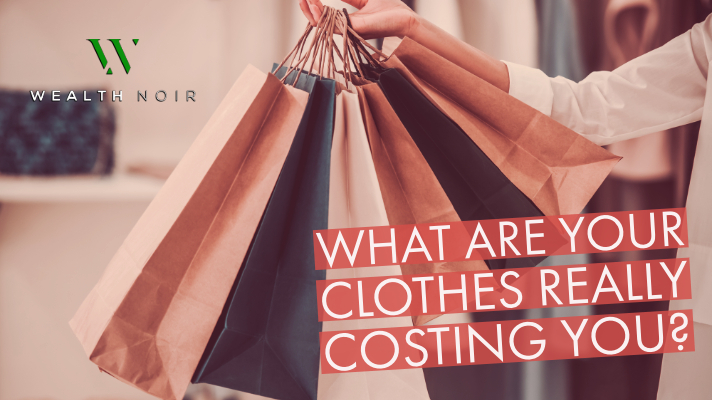 “These expensive. These is red bottoms…” – Cardi B

It’s not often you will catch me quoting Cardi B but when she’s right, she’s right. Red bottoms are, in fact, expensive, especially when you look at the opportunity cost of purchasing one pair of the famous, designer kicks instead of saving for your future. What about all of the other trendy, beautiful, wallet-gouging fashion and accessories we just have to have? How much are they costing us in the long run? Are they really worth it?

Given that many of us heard the stereotypes that we wouldn’t make it to our 21st birthday, or we’d be stuck fighting generational “broke-ness,” it’s amazing that we’re educated, high-earning, and saving for retirement. While all of our futures are uncertain, it would behoove us to err on the side of caution and tuck some money aside. It’s better to have it and not need it, than need it and not have it.

Let’s Run Through the Stats

In 2015, the average income for those aged 16 to 34 was around $35,592. With low incomes and high student loan debt, how are they saving for the future? Some sources say 71 percent of millennial workers are saving for retirement (depending on how you define millennial). Another report, from the National Institute on Retirement Security, says that of the 66 percent of all millennials who are offered a retirement plan at work, only about half are actually contributing to it. A lot of employers offer a contribution match so the 33 percent that are not contributing are missing out on free money.

My first job after college matched 5 percent of my income in my 401K if I contributed 5 percent. It was pre-tax and tax-deferred income so it lowered my taxes that year as well. About 25 to 40 percent say they aren’t eligible for a work-sponsored 401k or equivalent. Given the gig economy, and trying to find a job during the recession, I’m not surprised.

Conversely, there are reports that millennials spend $600 billion annually and it is projected to hit $1.2 trillion in the next couple of years. Are we prioritizing spending over saving?

Is Your Shoe Habit Really Worth It?

One of the most loved brands in our culture is Nike. There were riots over its latest ads, which featured Colin Kaepernick, but they haven’t hurt the company’s bottom line. Nike is the second largest fashion company in the world. In 2017, Nike had revenue of $34.4 billion and a market value of nearly a $105 billion. Nearly 90 percent of Nike’s income comes from the Nike brand, with footwear accounting for 63 percent. There are at least 32 pairs of Jordans that were released, not including variations, from 1984 until now. They range in price from $100 to $250 on average.

Let’s look at the opportunity cost of buying a new pair of Jordans each year. If you purchased every pair at the low end of the price range, $100, that’s $3,200 spent. Instead of buying those shoes, if you had instead invested the first $100 in 1984, and invested $100 every year since, today you would have $14,721 after 34 years, assuming a 7 percent rate of return compounded annually.

What about luxury shoes? American millennials learn about luxury items through social media more than any other outlet. Perhaps doing it for the ‘gram has led to 55 percent desiring luxury goods and 21 percent following the “treat yo self” movement and making the splurge on luxury items. What if you bought stock instead of a pair of Cardi’s Louboutins? If you decided to forego one pair of red bottoms at $700, and bought some of that Nike stock instead, You would have over $2,180,344.90 invested from 1984 to 2018. That’s a nest egg that your shoes can never compete with.

How Much are Those Clothes Really Costing You?

Maybe shoes aren’t your thing and you’re good with the brands at your local big box store. What about the clothes you wear?

For those of us that like some variety to spice up our life, we have clothes for work, play and home, and should buy them within a clothing budget. Depending on how and where you work, you have at least two to three weeks worth of new outfits so you don’t repeat things too frequently.

On average, millennials spend $161 per month — or $1,932 per year — on clothing. While men and women spend about 25 percent of their wardrobe on shoes, men spend much less on clothes. Women have an average of $1,000 to $2,500 worth of clothes in their closets at any given time. About 9 percent have more than $10,000 worth of clothes, and 50 percent of women say 25 percent of their clothes are just collecting dust. Your investments can collect dust and interest at the same time. Can that “must-have” handbag do that. (Birkins not included.)

If you purchased stock in your favorite clothing brand instead of holding on to unused clothes bought without a clothing budget, you could be well on your way to a healthy retirement fund. Let’s say you invested 25 percent of the $1,932 spent the average annual clothing budget. That’s only $483 per year. If you bought shares every year in Michael Kors, starting in 2012, you would have at least $4,495.30 invested in only seven years. It doesn’t seem like a lot of money compared to the other examples and that’s because this investment began much later. To take advantage of compound interest, you need as much time as possible. This is why you have to start as soon as possible, if you haven’t started already. The later you start, the more money needs to be invested to reach your goal, and the less money you’ll have available for those “looks.”

Check Out:  Discovering Investing and Finding Entrepreneurship: An Interview with Phillip Washington, Jr.

Jewelry is Murder … to Your Retirement

We grew up watching rappers with gold chains swinging from their necks. Complex Magazine even did a “Top 50 Gold Chains in Hip Hop” list. Who could forget seeing guys with a “Jesus piece” hanging from their neck in high school? People are still buying them, and it seems in large quantities, if your favorite rapper’s Instagram page is anything to go by. A “fully iced, standard” Jesus piece can run you $16,000 in American dollars. What if you invested that $16,000 in a gold exchange-traded fund (ETF), back when we were in high school, circa *cough* 2005? GLD was $43.02 per share in January 2005 and $16,000 would net you about 371 shares. Today those shares are trading around $113 each, and your investment would be worth $41,796.38. Your local pawn shop would never.

I come from Florida, the unofficial “home of gold teeth,” so I’d be remiss if I didn’t include the opportunity cost analysis.

If you decided to bling out your pearly whites, it would run you about $2,150 for a bottom removable grill with diamond fangs. I f you invested that same $2,150 in Nike in 2005, at $9.40 a share, it would be worth $19,567.29 today at $85.55 per share, plus stock splits and dividends. What if you held on to the stock until you retire in 40 years? Let’s assume an annual return of 7 percent and no additional contributions. You’d have $273,837 but that won’t go very far in retirement. So let’s see what would happen to the balance if you contributed $2,150 annually. It jumps about four times higher to $806,190. What if you contributed $2,150 monthly? You would have over $6,307,175 invested and waiting for you when you retire. By contributing monthly, you take advantage of compound interest more effectively than contributing once a year.

Riding Clean, or Robbing Your Retirement?

Recently, Cardi B decided to prove she paid cash for twin Lamborghinis for her and her husband by sharing a screenshot of the bank withdrawal on Instagram. It showed a whopping, staggering, mind-blowing debit of $548,736.97.

Needless to say, there a million other things that could’ve been done with that much money, but here we are. She could have contributed to a 529 plan for her new baby’s education. She could have started contributions to an IRA. She could have purchased a primary home, a rental property, and/or land. It would have been especially lucrative if her rental property was paid for in cash, had multiple units and generated a nice monthly income. With a management company handling maintenance and tenants for a small percentage of the rent, and taxes paid from the income, she could earn a profit long past her days as an artist. If she decided to sell it in the future, an income-producing property can fetch a pretty penny. Conversely, she could give it as an inheritance to her daughter, who could use the property to generate income for her own retirement. This is generational wealth at its finest.

Check Out:  8 Ways to Improve Your Personal Finances

You could go to the Justice of the Peace and have a backyard reception. My sister did something similar. She and her husband got married at the courthouse, and my mom made all the food for the reception held at the local community center. You could elope, stream the wedding online, and have your honeymoon at the same location. If you still want a few loved ones to attend, you could have a destination wedding, which reduces the number of guests. This will drastically reduce your reception costs since you typically have to pay for the food per person, and everyone won’t be invited or able to make it. My best friend is getting married in the Cayman Islands and will stay a few extra days for her honeymoon. She’s saving a ton on wedding and transportation costs by staying in one place. Also, her guest list was only 50 people compared to the hundreds that would attend locally. By using less expensive alternatives, those couples could have saved for a down payment on a house or bought a fixer upper in cash. They could have paid off student loan and credit card debt, saving them a ton in interest that can then go to savings and investments. Or, eligible couples could have contributed to a Health Savings Plan for medical expenses. The great thing about HSAs is that they will roll over every year, all the way into retirement if unused. The limit for contributions increases from $6,900 to $7,000 for couples in 2019. Bank of America’s 2018 Better Money Habits Report said that some of millennials’ financial stress comes from buying a home, not saving enough, and planning for retirement. Saving money on your nuptials can be a great jumping off point for a secure financial future with less stress. Maximize the funds at the beginning of your marriage to set the tone for years to come.

I don’t think there is anyone on earth that loves our culture more than black people. We have started almost every trend ever, minus Birkenstocks and Patagonia sweaters. Unfortunately, we generally are the last ones to profit from them and, most often, the fashion trends become our downfall. Keeping up with the Joneses has been around forever, even if we never met the aforementioned family. When everything you do is a “look” or a “vibe,” you’re going to have to keep that momentum going to appease the masses, right?

That all adds up and unless you’re a celebrity, or an influencer who gets free products, it’s costing you more than you realize. At some point you have to put everything into perspective. Does your return on your investment portfolio look as nice as your Instagram page? If not, where can you make adjustments? Let us know in the comments.

Flanice Lewis holds a bachelor’s in management from Howard and an MBA in Finance from Colorado Tech. She is a breast cancer survivor, speaker, personal finance blogger, world traveler, and ramen lover. In her spare time, she helps small businesses grow. 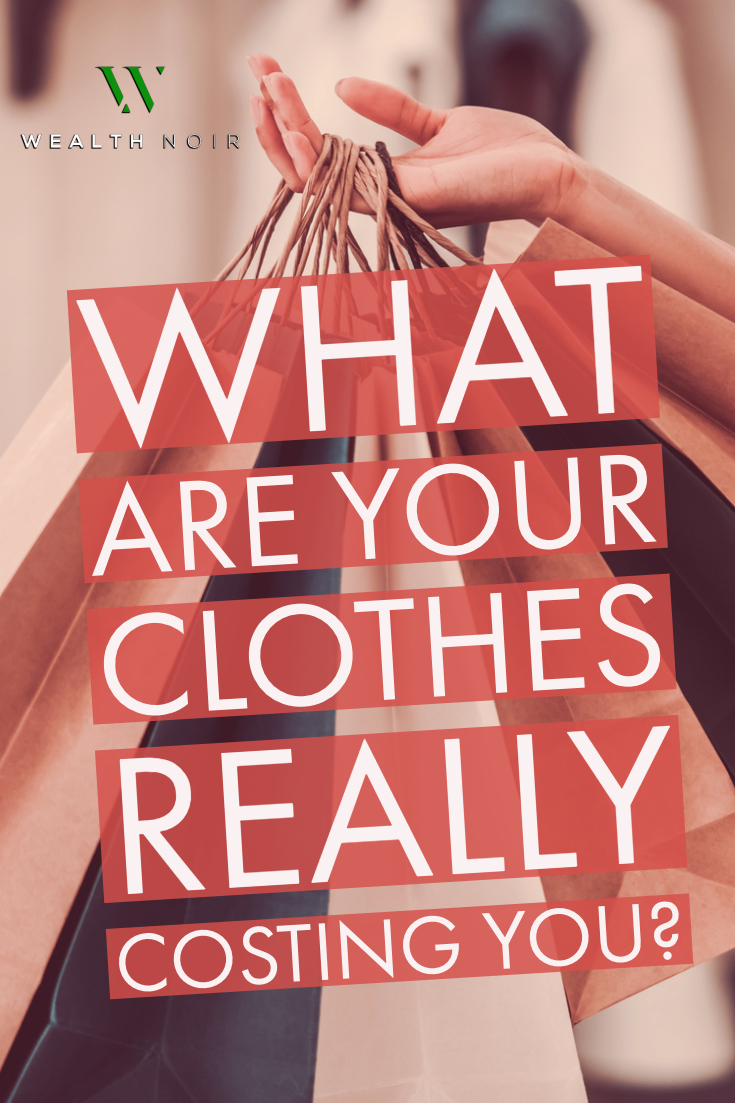