In the second half of this series, I’m exploring current proposals that could help close the racial wealth gap, individual actions you can take to help reconfigure our systems, and a few next steps to help you and your family rise above the statistics. As I wrote in part one of this series, the racial wealth gap is a complex and systemic issue that took centuries to develop. Unfortunately, we don’t have that same luxury of time to solve this problem. Black Americans have been under-resourced and overlooked for far too long. Our creativity, talents and aspirations have been locked inside of a too-small box and it’s time to give ourselves the space to shine the way only we can.

Each one of us has the individual power to change our personal financial trajectory and break generational hurdles. The truth is, it will be harder for most of us to build wealth and we’re likely to build less wealth than the white person next to us taking the same actions. However, that doesn’t preclude us from taking the actions necessary to live our best lives while creating wealth for our children and grandchildren.

The path to building wealth is simple but not always easy. If you’re reading this blog post, you’ve likely heard most of this advice, but that doesn’t make it any less true. Spend less than you earn and invest the difference. Negotiate for what you’re worth and be sure to work within your zone of genius. Never give up on learning and improving yourself. Resist the urge to buy based on what everyone else has or the things that can make you look rich. Take care of your mind, body and spirit at the same time you’re building wealth.

As a financial coach, I advise people every day to take the same essential steps to building wealth. While there is nuance to everyone’s situation, here are some key steps:

I’ve observed that many of my Black clients feel like they’re behind financially and when you read about the racial wealth gap it’s easy to understand why. Unfortunately, we tend to let that anxiety lead us into making hasty financial decisions or fall for get-rich-quick schemes. The typical path to wealth isn’t immediate or sexy and sometimes can be very complicated. My dream is to see us all support each other in taking these steps so we can collectively build our wealth. By doing so, it will begin the slow journey to closing this gap.

In order to bridge this chasm for all of us, we will all have to work together to change the environment in which it exists. If you read part one of this article, step one is already done – you now know this problem exists and I hope you feel like you have some insight into the how and why of it as well.

The next step is creating more capital opportunities for Black entrepreneurs and artists. Whenever you can, add a Black-owned restaurant to your monthly rotation or invest in a Black-owned business or project. Apps such as Mirriya help connect you to Black-owned  businesses by making it easier to find and support them. Look for the grants and loans that have recently become available just for us and grow your business to the next level. Keep fighting to get the capital you deserve for your project. Hire a paid intern or staff member for your business and sow into them and their projects. It’s up to us to keep breaking down the barriers to capital that have been put in place to keep us from achieving.

And finally, keep a close eye on our system. Our system has been built over centuries through laws. As a democracy, we have the right to voice our opinions on those laws. So, stay aware as new legislation in housing, education, policing, voting and tax policy is introduced. Consider how these changes may affect the equity in our system and then vote accordingly.

The latest work being done to close the racial wealth gap is taking place in the Senate. Senator Charles Booker (D-NJ) has re-introduced the American Opportunity Accounts Act, otherwise known as The Baby Bond Bill. The bill would give a $1,000 bond to all babies born in the U.S. starting in January 2022 and an additional deposit of up to $2,000 each year based on the wealth and income of the child’s family.

Naomi Zewde, Assistant Professor, Graduate School of Public Health & Health Policy at City University of New York (CUNY) Hunter College estimated that this policy could reduce the racial wealth gap from a factor of 16 to a factor of 1.4. This is an incredible gain for one piece of legislation that could be relatively easily enacted while having a universal impact on poverty in the U.S. and an outsized positive impact on poverty among Black people.

Another proposal, not quite in committee, is H.R. 40, the Commission to Study and Develop Reparation Proposals for African-Americans Act. This bill has been introduced in every congressional session since 1989 but has never reached a committee vote, which is normally the first step toward passing legislation. This year, it has finally reached the point of coming up for vote. The bill, which references the “40 Acres and a Mule” that was promised under the Special Field Order #15 that I reference in the first article, is meant to address the effects of that order never being passed. The thought is if that order had been carried out, it could have been the capital basis for Black people to build wealth, thus eliminating the gap that we see today.

Check Out:  Getting Started With Out of State Real Estate Investing

Dr. William Darrity Jr., economist and author of “From Here to Equality” makes a case for reparations that would require an estimated $10 to $12 trillion in federal expenditures. These funds are meant to act as a repair of lost wages and capital to Black Americans as well as an amends for slavery and the denial of wealth building capital in the first place. If the bill passes, it will just create a commission to study the effects and potential execution of giving reparations to Black Americans – but it’s a first step.

According to the Federal Reserve, the national student debt reached its highest level ever in 2020 – $1.7 trillion. President Biden campaigned on the idea that he would forgive $10,000 in student debt. Other politicians have gone on to call for as much as $50,000 in debt forgiveness.

A study by the People’s Policy Project found that in 2019, 63.4% of all student debt was held by white borrowers and 24% by Black borrowers. Even though Black people make up fewer total borrowers, that means that Black students make up a much higher percentage of the nation’s student debtors than their proportion of the U.S. population, which was 13.4% in 2019, according to the U.S. Census.

Interestingly, a 2016 Brookings Institute study found that 47% of Black students who started college in 2008 enrolled in graduate school. In comparison, 38%  of white students in the same period went on to graduate school. As a result, four years after getting their bachelor’s degrees, Black graduates had on average nearly $25,000 more student loan debt than white graduates. Two decades after beginning their degrees, the median Black student debt was still $18,500. Median debt still owed by white students was just $1,000. In other words, whites had paid off 94%  of their debt, but Black borrowers still had 95 % of their debt left.

Darrick Hamilton, the director of the New School’s Institute for the Study of Race, Stratification and Political Economy, calls this choice by Black students a résumé-building strategy, saying that, “If you know the labor market is going to be more discriminatory towards you, one strategy might be to make sure that you’re highly credentialed when you go into that labor market.”

While forgiving student loan debt could have a transformative impact on over 45 million student borrowers, the disparity in how student loans are currently distributed would make this type of forgiveness have an outsized impact on Black students.

Check Out:  A Quick & Easy Guide to a Diversified Portfolio

If all Americans are given the opportunity to go to a free quality pre-school, more students will graduate from high school. This also decreases costs on families that require both parents to work, which historically would have meant they would have been paying for childcare. By expanding these benefits into secondary education, ideally more students would be able to continue their education without taking on as much student debt. This policy could not only help close the racial student wealth gap, but also potentially help close some of the gender wealth gap as more mothers (the usual caregivers to younger children) would be able to afford to stay in the workplace.

Bringing it all together

It will likely take a combination of some or all of these solutions in addition to others we haven’t conceived of yet to close this gap. Unfortunately, this challenge is as much sociological as it is economic. Even if all Black Americans have the same resources or at least the same access to resources as white Americans, we still have to work within inequitable systems that have historically left us out or have provided us with less.

The crucial question to solving this problem, and the one I still haven’t been able to answer, is what does the U.S. look like without a racial wealth gap? In other words, what is our definition of success? With most complex challenges, the smartest strategy is to begin with the end in mind. In this case, we’ve literally never seen an America where Black people have had equal rights and resources, so it’s hard to know exactly what our desired outcome should look like. Devising that new reality is the crux of this work – and that’s why we need your voice.

Bevin Morgan is a Financial Trainer at The Financial Gym who has paid off over $200K in debt to become debt free. She is a real estate investor and self-proclaimed personal finance nerd. She specializes in helping Black female entrepreneurs and creators gain confidence in their financial futures with a touch of woo woo. She is on a personal mission to help bridge the racial wealth gap in this country. Black families hold less than 10% the average wealth of white families. Instilling financial confidence in Black women is one small step she’s taking to help change that. 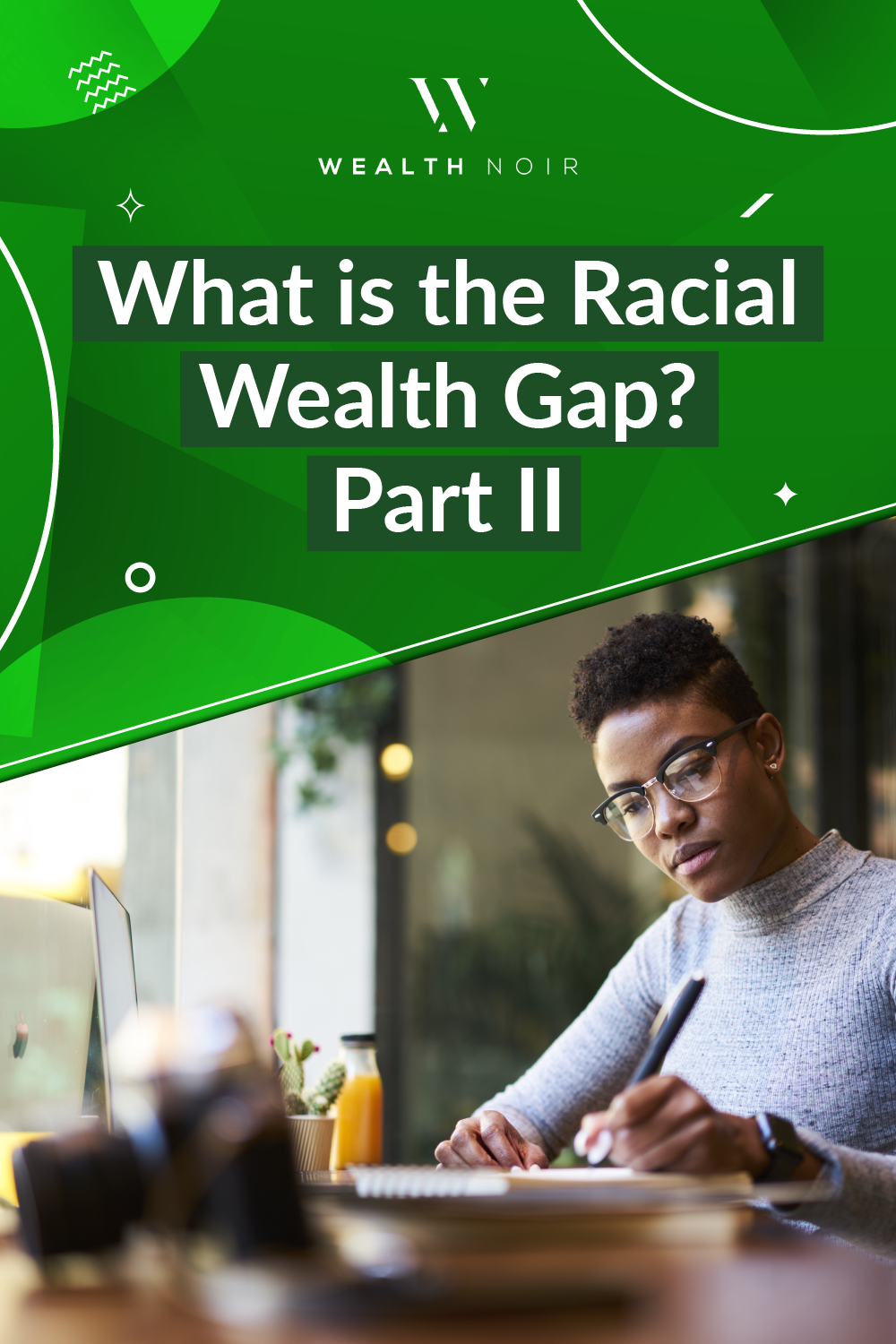