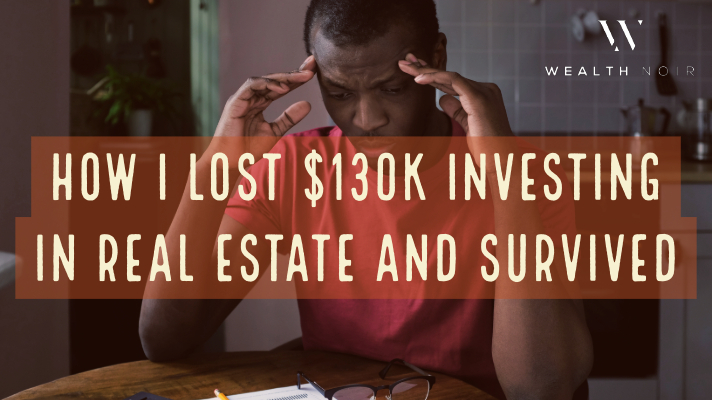 I made a mistake investing in a rental property … and I survived.

If you’ve read my articles you may be fooled into thinking that I have a perfect investing track record with many rental properties. You may think my success in building wealth came without mistakes or setbacks. You may believe that I have just been successfully investing my money, learning about finances and have a spotless record of success.

I have yet to meet the investor who hasn’t had a failure or setback. I’ve met several claiming this, and they are full of … let’s just say I don’t trust them.

The truth is that failure is a part of the process. It doesn’t matter where you are in your journey to wealth, be prepared for failure to hit you along the way. Maybe you over spent last month. Maybe you made a bad stock pick and lost more money than you would like to admit. Maybe you had to evict a tenant from your rental property. Maybe you got a little too excited about cryptocurrency after watching the news and took a huge loss when reality set in with the markets. And if it hasn’t happened yet, it will.

But, I’m here to tell you it’s OK. And not in a hypothetical “whatever doesn’t kill you makes you stronger” type of way. I’m here to tell you I’ve been through mistakes, big and small, and managed to push through them and prosper in the end. I’m here to open up and tell you about my one of my biggest blunders to date and how I made the best of it and recovered.

I was 24 and living in my parent’s house.

After I graduated from the University of Maryland, I landed a great job at a government consulting firm in the DC area. I was proud of both my salary and job after years of grinding in school and many internships.

Now, I could have easily afforded a nice apartment in DC. Instead, I decide to go back into my parents home in the deep suburbs of Maryland, in my old bedroom. It sucked — a lot — but I was able to save five figures in a year and a half. It would have been more if I didn’t buy a luxury car and a motorcycle, but that’s another investment mistake for another day.

It was 2007, and I was ready to move out. Everyone, no matter how old or how little money you had, was buying a home. They said “homes never lose value” and “it’s an investment”. I was reasonably savvy and wanted a starter home I could turn into a rental, just like my parents had done. That rental helped my brother and I get through college debt-free and was my first example of generational wealth.

Check Out:  REITs vs Rentals: What's the Best Way to Invest in Real Estate?

To prepare myself for the largest purchase of my life, I did my research. I bought books on real estate investing, including “Investing In Real Estate”, to learn the ropes. This was before the website and podcast Bigger Pockets, their superior book “The Book on Rental Property Investing” and all the other resources available now. Real estate investing wasn’t as sexy back then.

I worked with several agents and scoured neighborhoods for deals and places with good rental income. This search took months. I wanted a place I could live in but turn into a rental within two years because I planned to go to grad school.

After all my hard work, I found the perfect two-bedroom condo in Largo, MD. I did all the analysis and was happy with the numbers. It was a short sale with a price $30k lower than what other condos in the development sold for. It was near the subway and apartment complexes, which is good for a rental. Rents in the area were more than my mortgage, and I was excited to live in the property first. It had a gas fireplace with a remote, which excited me for “visitors” since I was tired of being a grown man sneaking girls into his childhood bedroom.

The housing market had been dropping, and I knew it was all over and I was getting a deal. Buy low for a discount and reap the rewards, I thought. What could go wrong?

After a lengthy and annoying closing process (short sales can take forever), some repairs, a handful of improvements and finally moving in my stuff, I was happy and settled in my new home.

It was 2008 and I was studying for the GMAT and getting ready to apply to business school. Even though the economy was melting, I was happily employed and getting promoted as government funding increased and my firm was killing it.

Yet, when I checked my housing estimate in Zillow, it was falling fast. By 2009 my $230k condo had lost at least $50k in value. According to the news, there was no end in sight. At its lowest point, my home had lost over $130k in value, although by this time I had relocated to Atlanta and was renting out the condo at a loss.

For any seasoned rental investor, you may be thinking “So what?” As long as the rent is coming in, you’re good”.

Check Out:  Financial Advising for Impact: An Interview with Kamila McDonnough of GRID 202 Partners

Well, when a recession happens, rental prices drop and it gets hard to find good tenants. The previous rental income I had projected was a pipe dream I had to let go of. To make it worst, I had completely underestimated my expenses. and was losing up to $500 each month.

I paid $500 out of my own pocket every month to cover the mortgage and HOA fees since the rent didn’t cover my total costs. This continued for years. Even after leaving my job for grad school (aka no income) and continued even after getting married and starting my new job (thank God for savings). I even tried to get rid of it in a short sale after getting laid off, but the bank saw I had a retirement account and shut it down.

It sucked. For years I was paying because I hadn’t been able to foresee the oncoming recession and messed up my math.

An important thing to understand about investing is paper losses vs. realized losses.

You don’t realize a loss until you sell an asset. If it drops in value, but you still own it, it can recover or increase in value. Losses or gains are just forms of accounting until you actually sell or dispose of the asset.

With an understanding that an increase in value could help me recover, I picked myself up and set out to create a plan for recovery.

The Road to Recovery

I had a major decision: What do I do with this $130k rental property loss on my books?

As I usually do, I dug into the numbers. I estimated different growth rates of rent, the value of the house and different financing options. I needed to determine if I should just sell it, take the “L” and move on, or keep it and get my money back.

Luckily, it was 2012 and there were a few things working in my favor. Mortgage rates dropped as new loans dried up and banks looked for people with great credit, which I had. I got a new job after my layoff, giving me the income to qualify. Rents had started to rise and so had the value of the rental property. And God bless Obama for passing an act for homeowners underwater. After going through the pain of an eviction, I had good tenants and a property manager who was working for me and my rental property.

Check Out:  How to Save Money When Moving Abroad

Even with the amount I was covering, the mortgage was still mainly being paid by someone else and my loan value was dropping every month. I discovered I could refinance to lower my mortgage payment and get a lower rate, meaning I would not need to pay out of pocket. And my numbers showed that I would start turning a profit in about six years as the mortgage lowered, rents increased and so would the value of the home. Plus, even if it didn’t go up a single cent, after 30 years I would own the home outright and would have only paid a fraction of the value in the monthly loss I was taking. Lastly, I was getting a huge tax benefit from both the monthly losses, depreciation on the house and some newfound business expenses I could deduct.

Basically, if I made the right moves, held onto the property, and covered the losses, I would still come out on top.

It’s All Working Out Now

Instead of panicking and freaking out, I kept a level head and came up with a plan supported by numbers and evidence. I then used the huge drop in housing prices to pick up two more properties in the area. My first property doesn’t make much of a monthly profit but it’s getting paid off by someone else and my other properties bring in good profits.

I learned a lot from my multi-year struggle with my first rental property. I would never have been comfortable or had the team in place to triple my holdings if I didn’t go through that first one. It took seven years after my first purchase to make a second, but wealth takes time.

I tell you this story not to scare you, but to empower you to take the first step in your journey to wealth. Yes, you will fail, but you can recover and every failure is a life lesson learned. Also, I hope you learn from my mistakes with my first rental property and can avoid them for yourself.

Do you have a life lesson that you endured on your journey to wealth? Leave a comment and share with the community so we can grow together. 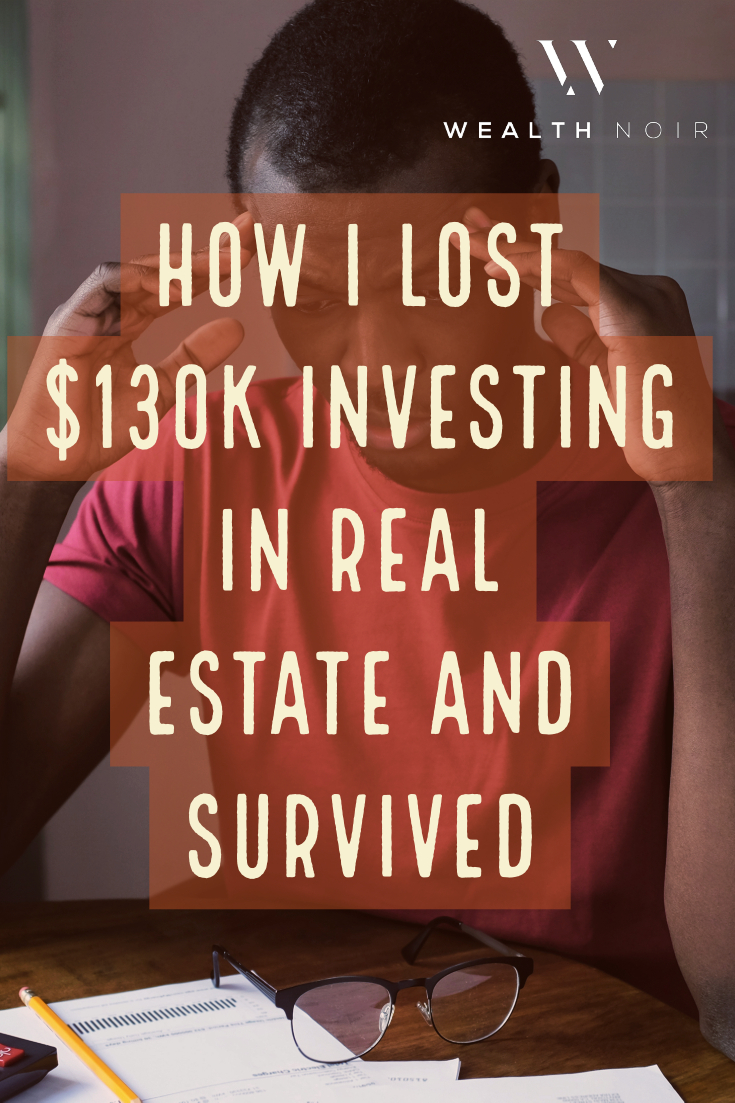