The following conversation was conducted over email and edited for flow and clarity.

Acquania Escarne of Wealth Noir (WN): Kevin, thank you for joining us today. I can’t wait for the Wealth Noir community to learn more about your journey and how you transitioned from managing over $140 million in assets of wealthy clients to helping all people with their finances through your website, BuildingBread, and your radio show.

But before we dive into that, can you tell our readers a little more about yourself?

WN: Wow, a radio show in New York is a huge platform to magnify the messages on your website. But let’s go back a bit. How did you get started in the personal finance space?

Kevin L. Matthews of BuildingBread: I was born and raised on Black Wall Street in Tulsa, Oklahoma so personal finance and entrepreneurship was always something that caught my eye. I was always interested in how money could grow and how people could use wealth to impact their community. But I got my first “official” start when I got an internship in New York in 2010…and it did not go well. I found out first hand how the financial industry can use a ton of numbers and terms to complicate things.

It was that frustration and confusion that became the starting point of my business. I never wanted anyone to have to go through that again. I believe investing is an activity that should be simple and accessible.

WN: It’s funny you mention an internship being your inspiration. I had a similar experience and it was my internship that inspired me to choose a different career. So an internship experience, even if it’s bad, can be invaluable.

Kevin, I mentioned earlier, you were a very successful financial advisor managing over $140 million in assets. You were also recognized by Investopedia as one of the top 100 advisors. Why did you change your career path and create BuildingBread?

Kevin L. Matthews of BuildingBread: I actually started BuildingBread a few years before becoming a financial advisor. I was just a sophomore at Hampton University when I built my first website and taught my first class using the knowledge I learned from my internship and books I’d read. When I graduated in 2012, I became a math teacher in Dallas,Texas, with Teach For America and it was that experience that led to becoming a financial advisor.

There were far too many kids who were ready for college but couldn’t afford it or left school early because of the cost. I thought being an advisor would help me to work with families like mine, and, in the beginning, it did. As I improved my skills, I was required to serve clients that were wealthier, and, by default, whiter. Before leaving, I was not allowed to have clients that did not have a minimum of $250,000. I left because I didn’t think it was fair and I was not making the impact that I set out for.

WN: What were your initial thoughts about entrepreneurship and going into business for yourself?

Kevin L. Matthews of BuildingBread: Following your passion isn’t for the faint of heart. I think most people have an overly optimistic view that because they start a business in something they are passionate about that it will be easy. That couldn’t be further from the truth. Loving what you do is one thing; running a business around that takes an entirely different skill set.

[My transition] wasn’t much of an unknown for me; it was more of me just turning up the heat on something that had been on the back burner. I knew from the time I started that it was something I wanted to do and I built out tiny steps along the way. For example, I wrote my first book as a senior in 2011 and gave it away for free. It was a test market for what would become my bestselling book, Starting Point, three years later.

WN: What an amazing story. Now, can you tell us more about your radio show? What topics do you cover and how do you use your radio show as a platform to connect with more millennials?

Kevin L. Matthews of BuildingBread: It’s cool because I control 100% of the show’s content, so I am able to respond to trends on social media or common questions and problems people may be experiencing. My goal with the radio show is to inspire listeners to set, simplify and achieve their financial goals. To do that, I bring on guests who have a diverse range of experiences. I’ve had a guy who made his first million in five years to people who have paid off $100,000 worth of debt. Generally, I tend to cover investing, debt, race and entrepreneurship.

WN: What is the most common question you get asked from your followers and listeners?

Kevin L. Matthews of BuildingBread: “How can I start investing?” is the number one question that I get. We all know how important generational wealth is, but figuring out where to start tends to be a big barrier. What most people don’t realize is that if you have access to a retirement plan at work (think 401k, 403b), you’re an investor! Generally, this will be your largest and most important investment.

Check Out:  How Global Village Foods Is Bringing African Cuisine to New England and Beyond: An Interview with Wangene Hall

WN: If you could flip a switch and get everyone to do one thing related to their personal finances, what would it be?

Keving L. Matthews of BuildingBread: Whew! There are several switches I would like to flip, this question is pretty difficult.

If I could pick just one, I would get people to realize that you can invest for your future while paying down the debts you have. I think we can be a bit too focused on debt and some people feel like they have to be 100 percent debt free before they invest any money for the future. Not only is that wrong but it can cost you big time. If you’re waiting to pay off your student loans, it could take you 10 years or more to pay that off. If you aren’t investing during that time, you could be missing out on an entire decade of growth plus any free money in the form of a company match. You’ll never get that time back, and there is no student forgiveness or refinancing that you can do to fix that situation.

WN: Kevin that is excellent advice. Ok, switching gears now. Is there any particular childhood memory you remember that helped influence the person you are today?

Kevin L. Matthews of BuildingBread: I think I was 12 or 13 [and] my parents decided that they were going to “cut me off,” which meant they were no longer buying me video games. At that point, my allowance was $20 a month, which was far less than the $50-$60 I needed plus tax. I needed to figure out how to close that gap since my income was limited. Well, my parents always gave me $5 for lunch every day. Using the time-management planners everyone got at the beginning of school, I quickly figured out how much I could save each month while avoiding holidays and breaks. I ended up spending $3 on lunch each day, and saving $2. So in a normal month I’d make $10 a week or $40 per month. I didn’t know it then, but this was essentially my very first financial plan.

WN: You mentioned that you were from Tulsa, Oklahoma. What are your thoughts on the Tulsa Real Estate Fund?

For our members that don’t know, the Tulsa Real Estate Fund is the first 100% black-owned tier two Real Estate Crowd Fund. When first announced, this fund was supposed to raise money for the revitalization of urban communities and help investors own shares and equity in a real estate portfolio that would combat gentrification.

Kevin L. Matthews of BuildingBread: I like the idea of what the fund stands for, I do not like how it was marketed or the fees associated with it. That summer, I received dozens of calls about the fund because it was assumed by the name that the money was going to have a direct impact in Tulsa, which, at that time, was not the case. When you factor that with the fund’s [launch] on June 1st, the anniversary of the Tulsa Race Massacre, [it] was a slap in the face because nothing was going to the city it was named after: a city that fell well within the stated goals of the fund of helping low-income neighborhoods combat gentrification.

When it debuted in 2018, it was marketed as a $50 million fund when it had only raised less than 20% of that. As for the fees, at the time there was a 5.5% management fee and the fund would take 50% of any profits made, more than double the standard. There was even a section on the site with instructions on how to invest using funds from your retirement accounts, which can create tax issues for investors.

It is my hope that these issues are resolved because it is an awesome concept.

WN: Kevin, thanks again for this opportunity to learn more about you and investing. Before you go, are there any exciting products you want to share with Wealth Noir readers?

Kevin L. Matthews of BuildingBread: We just released our “Self Care is…” t-shirts in the BuildingBread store. They emphasize that savings, investing and paying down your debt are versions of self care. If you have a solid footing financially, it can insulate you from certain obstacles that cause additional stress.

Acquania Escarne is the creator of The Purpose of Money, a community of women building generational wealth for their families one dollar at a time. As an entrepreneur, real estate investor, and licensed insurance agent, Acquania has always been passionate about financial literacy. On her website, Acquania blogs about ways to help you improve your money habits, create wealth, and invest in real estate. Follow Acquania on social media for daily tips. 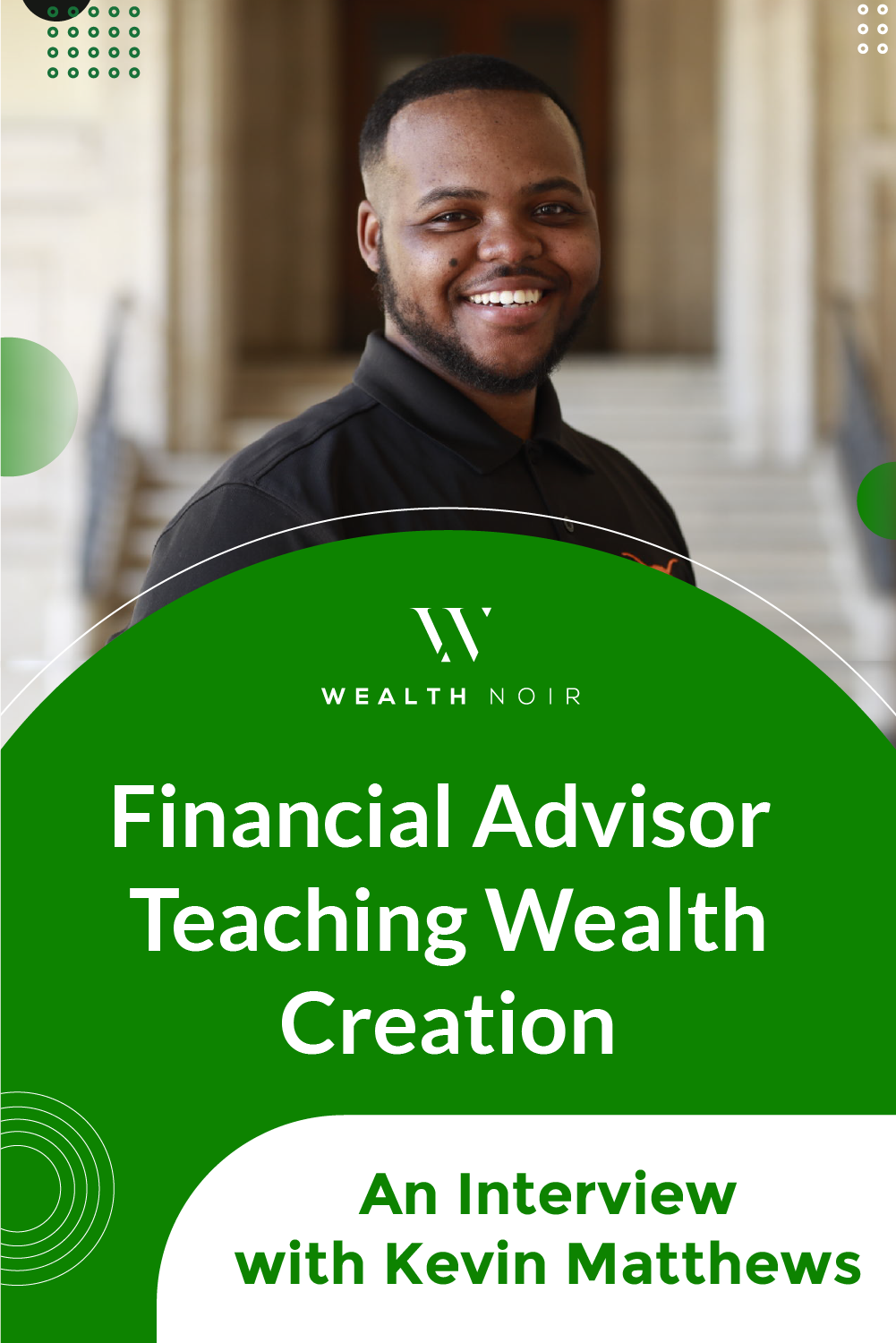